Although race relations and the fight against racism have drawn interest from Hispanics in recent years – a PEW Research Center survey in December 2019 ranked it as the third most important issue, after only immigration and the economy, and another from Latino Decisions in September of that year placed it third as a priority for Latinos who responded in Spanish – coverage of these issues by the Spanish-language media has at the same time fallen steadily since the beginning of the Trump administration.

We did an analysis of the coverage on racism with a database of all the stories that contained the Spanish words for terms such as “racism”, “racist,” “racist,” and “racial.”

The percentage of stories that address racism has remained greater than the figures for coverage of government health insurance and employment, although it continues to lag far behind the media attention given to immigration.

Racism, another big issue whose coverage has decreased

Despite the growing interest of Latinos in racial issues and combating racism, the percentage of stories that address these issues in Spanish-language media decreased.

Racism, another big issue whose coverage has decreased

Despite the growing interest of Latinos in racial issues and combating racism, the percentage of stories that address these issues in Spanish-language media decreased.

Without a doubt, the big news event in the coverage of race issues during the study period was the public scandal over President Trump’s reaction to the white supremacist march in Charlottesville, Virginia, in August 2017. On Saturday, August 12, during a march that turned violent, a woman died, murdered by a white supremacist who drove a car into a group of people protesting against racism. That same day, Donald Trump referred to the events, but avoided condemning neo-Nazi groups and instead equated them with the people who opposed them, saying that the violence “came from both sides.”

Sunday, August 13, the day after the march, was the day with the highest coverage of racism by the Spanish-language media over the three years analyzed. That day, articles on the subject represented 14% of all content published by the media.

In fact, the six days with the most coverage of racism during the first three years of the Trump administration were all that week, between Sunday, the 13th, and Saturday, the 19th, of August 2017. Each of those days, coverage of racism was greater than 10%, the only time in the three years studied when that figure was exceeded.

After analyzing the most frequent phrases in articles that mention racism, it appears that media coverage in Spanish is, above all, influenced by what President Trump does or says. In fact, his name, “Donald Trump,” is the two-word phrase (bigram) most used by these media outlets. It appears 602 times per 10,000 stories that mention racism or racial issues, according to Media Cloud data.

Likewise, the analysis of the most frequent Spanish words and phrases in the stories about racism suggests that the media attention is mainly directed to the experiences of immigrants and Hispanics, about the situation that African Americans live in the country.

These are some of the most frequent words and phrases in the articles that address racism in the Spanish-language media studied. “Donald Trump” is the most common phrase. 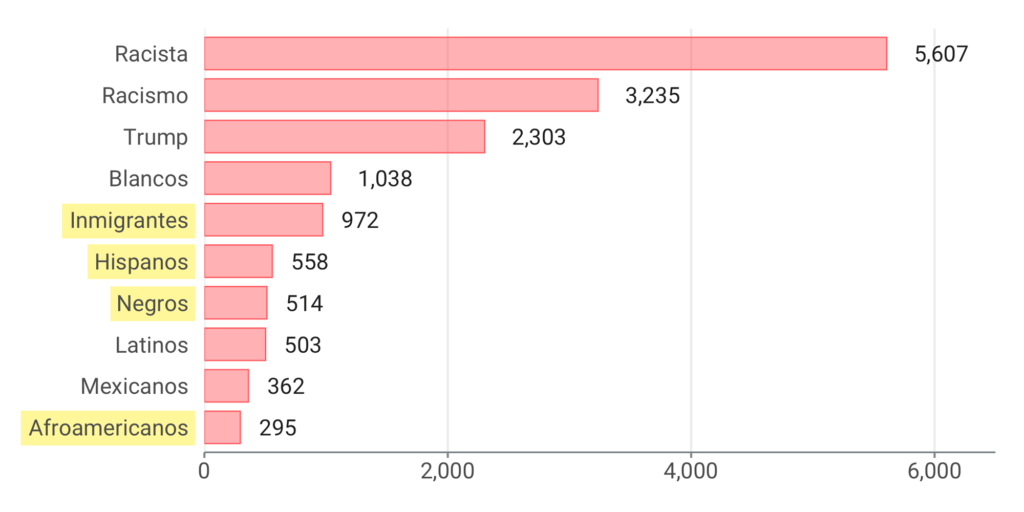 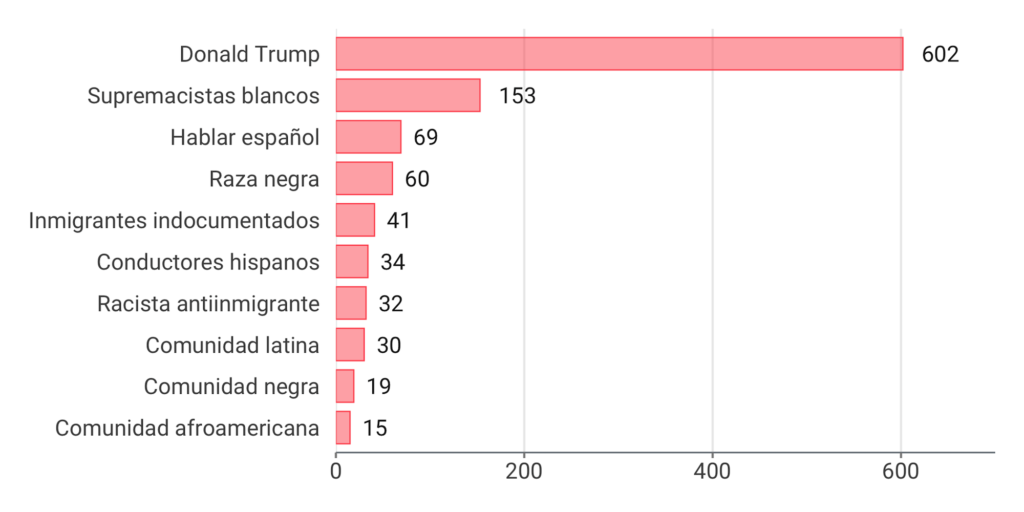